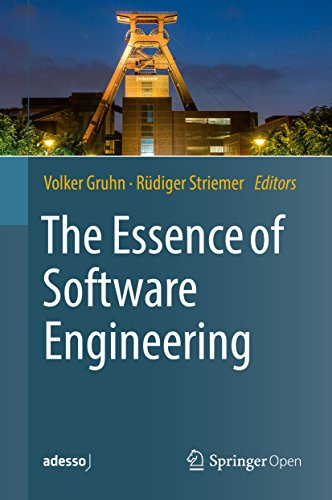 The Essence of Software Engineering (English Edition)
This open access book includes contributions by leading researchers and industry thought leaders on various topics related to the essence of software engineering and their application in industrial projects. It offers a broad overview of research findings dealing with current practical software engineering issues and also pointers to potential future developments.

Automated Machine Learning: Methods, Systems, Challenges (The Springer Series on Challenges in Machine Learning) (English Edition)
This open access book presents the first comprehensive overview of general methods in Automated Machine Learning (AutoML), collects descriptions of existing systems based on these methods, and discusses the first series of international challenges of AutoML systems. The recent success of commercial ML applications and the rapid growth of the field has created a high demand for off-the-shelf ML methods that can be used easily and without expert knowledge. However, many of the recent machine learning successes crucially rely on human experts, who manually select appropriate ML architectures (deep learning architectures or more traditional ML workflows) and their hyperparameters. To overcome this problem, the field of AutoML targets a progressive automation of machine learning, based on principles from optimization and machine learning itself. This book serves as a point of entry into this quickly-developing field for researchers and advanced students alike, as well as providing a reference for practitioners aiming to use AutoML in their work.

Elements of Robotics (English Edition)
This open access book bridges the gap between playing with robots in school and studying robotics at the upper undergraduate and graduate levels to prepare for careers in industry and research. Robotic algorithms are presented formally, but using only mathematics known by high-school and first-year college students, such as calculus, matrices and probability. Concepts and algorithms are explained through detailed diagrams and calculations.

Programming for Computations - MATLAB/Octave: A Gentle Introduction to Numerical Simulations with MATLAB/Octave (Texts in Computational Science and Engineering Book 14) (English Edition)
This book presents computer programming as a key method for solving mathematical problems. There are two versions of the book, one for MATLAB and one for Python. The book was inspired by the Springer book TCSE 6: A Primer on Scientific Programming with Python (by Langtangen), but the style is more accessible and concise, in keeping with the needs of engineering students. The book outlines the shortest possible path from no previous experience with programming to a set of skills that allows the students to write simple programs for solving common mathematical problems with numerical methods in engineering and science courses. The emphasis is on generic algorithms, clean design of programs, use of functions, and automatic tests for verification.

Programming for Computations - Python: A Gentle Introduction to Numerical Simulations with Python 3.6 (Texts in Computational Science and Engineering Book 15) (English Edition)
This book presents computer programming as a key method for solving mathematical problems. This second edition of the well-received book has been extensively revised: All code is now written in Python version 3.6 (no longer version 2.7). In addition, the two first chapters of the previous edition have been extended and split up into five new chapters, thus expanding the introduction to programming from 50 to 150 pages. Throughout the book, the explanations provided are now more detailed, previous examples have been modified, and new sections, examples and exercises have been added. Also, a number of small errors have been corrected.
The book was inspired by the Springer book TCSE 6: A Primer on Scientific Programming with Python (by Langtangen), but the style employed is more accessible and concise, in keeping with the needs of engineering students.
The book outlines the shortest possible path from no previous experience with programming to a set of skills that allows students to write simple programs for solving common mathematical problems with numerical methods in the context of engineering and science courses. The emphasis is on generic algorithms, clean program design, the use of functions, and automatic tests for verification.

The Amazing Journey of Reason: from DNA to Artificial Intelligence (SpringerBriefs in Computer Science) (English Edition)
Organisms, or organized, living, systems. What's their origin? Why and how did they evolve? The Amazing Journey of Reason analyses the evolution of complex structures in the universe -from the subatomic particles after the Big Bang onwards- in order to understand the emergence of today's interconnected society. Artificial Intelligence, it concludes, is just the final step of a journey which started with DNA, itself the first Information and Communication Technology devised by nature on planet earth. What we are living today is the formation of the distributed nervous system of a metaorganism, in which human beings are the cells. A reassuring environment for us, but one where each individual will count increasingly less. A hugely complex, world-wide organism which makes Homo, while more communicans, also increasingly less sapiens.

The Ethics of Cybersecurity (The International Library of Ethics, Law and Technology, Band 21)
This open access book provides the first comprehensive collection of papers that provide an integrative view on cybersecurity. It discusses theories, problems and solutions on the relevant ethical issues involved. This work is sorely needed in a world where cybersecurity has become indispensable to protect trust and confidence in the digital infrastructure whilst respecting fundamental values like equality, fairness, freedom, or privacy. The book has a strong practical focus as it includes case studies outlining ethical issues in cybersecurity and presenting guidelines and other measures to tackle those issues. It is thus not only relevant for academics but also for practitioners in cybersecurity such as providers of security software, governmental CERTs or Chief Security Officers in companies.

The Everyday Life of an Algorithm (English Edition)
This open access book begins with an algorithm–a set of IF…THEN rules used in the development of a new, ethical, video surveillance architecture for transport hubs. Readers are invited to follow the algorithm over three years, charting its everyday life. Questions of ethics, transparency, accountability and market value must be grasped by the algorithm in a series of ever more demanding forms of experimentation. Here the algorithm must prove its ability to get a grip on everyday life if it is to become an ordinary feature of the settings where it is being put to work. Through investigating the everyday life of the algorithm, the book opens a conversation with existing social science research that tends to focus on the power and opacity of algorithms. In this book we have unique access to the algorithm’s design, development and testing, but can also bear witness to its fragility and dependency on others.
ShareTweetTeilen Teile per WhatsApp Teile per Messenger
Zusätzliche Info
Beste Kommentare
6 Kommentare
Dein Kommentar